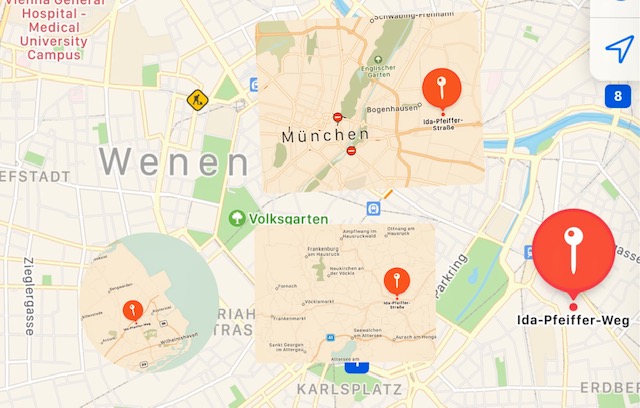 I have ordered several of Ida Pfeiffer’s travel books to be able to follow her travel path. The publisher warns you that they cannot guarantee the completeness of the books. They aren’t reprints, but editions of the original publication copied page by page. In the weeks to come the books will be delivered at the door or dropped onto the doormat in the hallway one by one. Until that time I have to make do with what I can find on Pfeiffer on the web. The first digital step to take would be to find traces of Ida in present day Vienna.

After her passing, it remained silent around Ida Pfeiffer for a long time. The way in which she had travelled the last fifteen years of her life, collected thousands of artefacts and had published on her travels – that lifestyle belonged to the world of men, not women. The ranks closed and it really seemed like her legacy, knowledge and skills no longer mattered. It is thanks to the lobbying of the ‘Verein für erweitere Frauenbildung’ (‘Association for the advancement of the education on women’) – an association that concerned itself with strengthening the educational and professional possibilities for women, established in 1888, that Ida Pfeiffer received a reburial in the honorary part of the Vienna Zentralfriedhof or Central Cemetery. And this with a fitting tombstone. That was a huge success, because such honor had hitherto only been bestowed upon men.

You would think that people who receive a grave of honor would have a street named after them, to say the least. But Vienna has not been very generous with that. I hit upon a very small stretch of foot path, named after her in 2008. Why only such a small piece? Had she live there, or what? Questions I expect to get an answer to later on. Fortunately, her fame had spread to other parts. When you ask Apple Maps to take you to the Ida Pfeiffer Road, you get four spontaneous hits. The famous piece of footpath (number four in the four hits), a street in Munich, but also a street in the Austrian town of Vöcklabruck, Northeast of Salzburg and a road in the German city Wilhelmshaven.

The Viennese scientists have been somewhat more generous. The University of Vienna has found a paragon in Ida Pfeiffer. Since 2018, the Faculty for Earth Science, Geography and Astronomy have created an Ida Pfeiffer Professorship ‘to do top research for the sustainability of Planet Earth’. Every semester a different scientist is attracted to further stimulate the scientific debate.

Recently, the natural history museum in Vienna has commemorated Ida Pfeiffer with the Ida 001. This e-bike with hip looking containers back and front is used by the museum to go and meet the inhabitants to improve the dialogue between science and society. Unfortunately, Covid threw a spanner in the works and the bike is seen far less often than was originally intended.

And then, last but not least, there are two little creatures named after her. There is a species of shrimp named Palaemon idea and a grasshopper, known among biologists under the name Myronidus pfeifferae. Ida Pfeiffer brought home thousands of artefacts after her travels, more than 4.000 of which landed in Vienna’s Natural History Museum, according to Felix Czeike of the Historisches Lexicon Wien. It would be safe to suggest that Palaemon idae and Myronidus pfeifferae are also part of that collection.

Finally, Wikipedia measures up the Vienna VIPs. In the English Wiki Ida Pfeiffer is not taken up. In the German version she is. There she is, a woman at a lonely height and glorious at the same time on a list of practically only famous men from the 18th and 19th century.