Socialist architecture along the Danube (5) 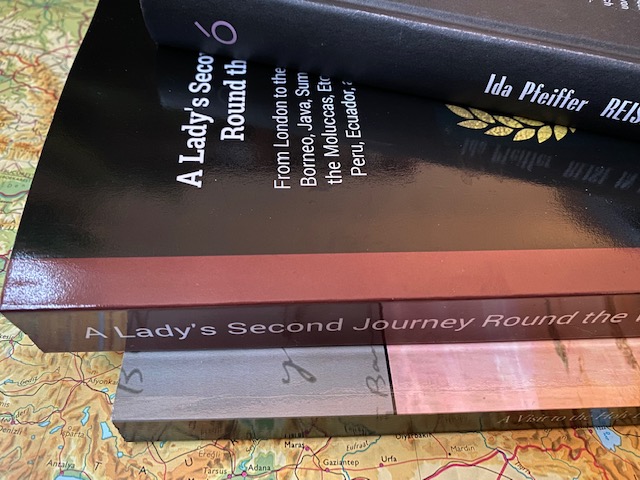 Ida Pfeiffer’s travelogues have finally arrived. At long last my journey can begin! When she takes the steamboat at Vienna Kaisermühlen on Tuesday afternoon March 22, 1842, I get on board too. I must say I have to get used to Pfeiffer a bit. She keeps running up and down the deck, crying out at every castle we pass how beautiful it is. And how charming the Danube meanders through the landscape. I am somewhat amazed about our explorer to be, who will visit the most unknown and rough places, but who at the moment is mainly spellbound by the schönen blauen Donau.

When you travel along with Pfeiffer like that, you see the region in front of you. The idyllic location of Pressburg (Bratislava), Pest (Budapest) and Belgrad (Belgrade) on the Danube. Sloping hills. Sturdy castles and towns where the Ottoman Empire and the Habsburgs have tested eachother. To us, that is an almost forgotten era, especially after the First and Second World War and especially the Cold War rewrote the history of this area again.

Pfeiffer will probably have known Pressburg well. Vienna may have been the capital of the Empire, but in Pressburg – 60 kilometers further on – the Emperor was crowned. In the meantime Pressburg has become Bratislava, is the capital of the Slowak republic, and is a city with two faces. The old town – with the Castle of Bratislava on top of a hill – will still feel familiar to Pfeiffer. But that doesn’t hold true for the other side of the Danube.

There, around 1970, Petrzalka arose – a highrise area of concrete colossi, completely in socialist architecture. It is the largest of its kind in the whole of Central Europe. Petrzalka houses over a 100.000 inhabitants. When I first drove to Bratislava, I did not know what I was seeing. All these highrises, like endless rows of totem poles in the landscape and only after that the old town appeared on the horizon.

A few years ago I was in Bratislava again and on a sultry hot summer’s day I visited Petrzalka. From the old town you’re there in no time: cross the Danube by tram, get out at the first stop, cross a pathway through a stroke of dry grass and there you’ll bump into the first rows of housing blocks. Concrete towers painted in soft yellow, pink and red. Softening colours to hide the rough material. Crumbling moldings and hardly a living soul on the street because of the heat.

Ìn her time, Pfeiffer is impressed by the transfer activities at the fortified border town of Semlin (Zemun). Here, on the South bank of the Danube, is where her Austria ends. Belgrad, just fifteen minutes by boat further on, is part of the Ottoman Empire. She finds the beautiful location of the city impressive and meticulously studies the mosques from the deck of the boat. ‘It is the first time that I see mosques and minarets,’ she jots down in her diary with enthusiasm. ‘And those that I can see from the deck have a round building covered by a cupula from which two slender minarets rise up like a sort of high and round pillars.’

Of the more than 200 mosques that adorned Ottoman Belgrade at the time, only one remains – the Bajrakli Mosque. A few decades after Pfeiffer had studied the city from her ship, the balance of power in the region shifted again. Belgrade came into the hands of the Serbians once and for all after a period of 400 years of Ottoman rule, interspersed by three interruption when the Austrians managed to recapture the city.

A visit to Belgrade has been on my list for a long time. Pfeiffer doesn’t go ashore here, but I am leaving the ship for a small trip. Semlin (Zemun) by now has become a suburb of Belgrade. And close to the picturesque Zemlin – in 1948 in Tito’s Yugoslavia – on a marshy piece of land, one of the most iconic residential areas of socialist architecture was built. When you look at the photos of this part of the city, you would almost think you have landed in the setting of a retro-futurist science fiction movie. Something with a subtitle that says ‘how we saw the future in the past.’

But that future is still the present and Novi Beograd (New Belgrade) looks as raw as seventy years ago. If you want a picture of present day Novi Beograd, have a look at The Calvert Journal (digital guide to the New East). In 2020 it featured an article by Jan Doroteo on Novi Beograd with magnificent pictures by Piotr Bedrnaski.

Doroteo: ‘“In Warsaw, where I’m from, most of the residential buildings from the communist era have been turned into kitschy, colourful blocks. Seeing the dense, raw and, desolate modernist architecture, and rediscovering the atmosphere of my childhood made me fall in love with Novi’s neighbourhood.’

Let Pfeiffer admire her fortresses and castles. Personally, I am much more curious for the rough edges of the city. When I end my reconnaissance through Novi Beograd at Block 13, I can just cross the road to the Museum of Contemporary art.