On the road with Ida Pfeiffer (1) 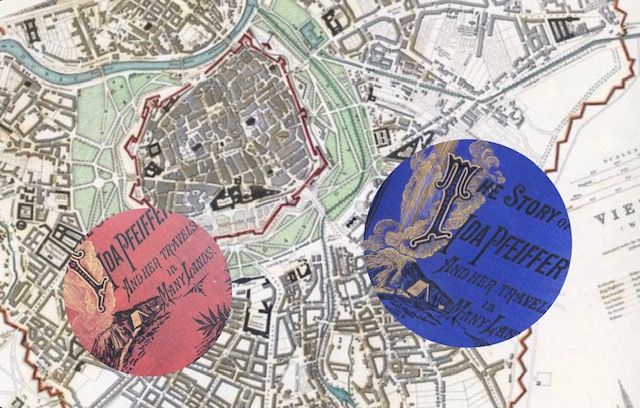 For some time already I had been looking for a traveling companion from a different era. Someone who would take me along on the basis of a travelogue. This week, I happened to come across Ida Laura Pfeiffer, born in 1797, in the closing years of eighteenth century Vienna.

In an era in which it was completely unusual for women to travel alone, Pfeiffer – after she had raised her children – decided that it was time to explore the world. The fact that she had barely any financial means, did not matter much to her. In the end she made 5 big travels and published 13 books, her travelogues were translated into seven languages. She became a (honorary) member of the Geographical Society in Paris and Berlin, but not of the London society – women were excluded from membership there. Famous geographers like Alexander von Humboldt and Carl Ritter belonged to her circle of acquaintances.

From Vienna to Cairo

Her travels became renowned and short articles about her appeared in the newspapers. Positive reports, but also caricatures. There were fierce discussions about her; a woman who was so explicitly present in the public domain and who undertook such travels – it simply was not done. She prepared her first travel (1842) more or less on the sly. Under the pretense that she would be visiting good friends in Constantinople and that all this was just a short trip, she could more or less take away the concerns from her children and the rest of the family. Yet, they weren’t keen on letting her go, because the visiting of friends in Constantinople by a lady traveling on her own at the time was highly unsuitable. Pfeiffer wisely abstained from mentioning the other destinations she had in mind: traveling on to Jerusalem and then further on to Cairo.

She did not leave it at this one journey. Four more travels would follow, two of which were around the world. Fact is, that apart from Australia she traveled each of the continents. Overcome by illness she was forced to postpone her plans for Australia until further notice and she traveled back to Vienna. There, one month after her arrival she died in October 1858 in her brother’s house. Her son Oskar took it upon him to work out the account of that last travel and publish it.

Because of Covid measures, traveling today has been subjected to considerable restrictions. Longing for other places, I endlessly search the web. I image cities where I would love to roam, border areas I would want to explore, exotic dishes I would like to taste and the art exhibitions I would go and see. In the meanwhile, I read like crazy, my interests flying off in all directions. Then I realized that I needed a guide, someone to hand me a path to follow. As a fellow geographer, Ida Laura Pfeiffer is the ideal guide. She explored her path 175 years ago and I follow her, digitally, 175 years later – curious to find out what state her world of yesterday is in today.